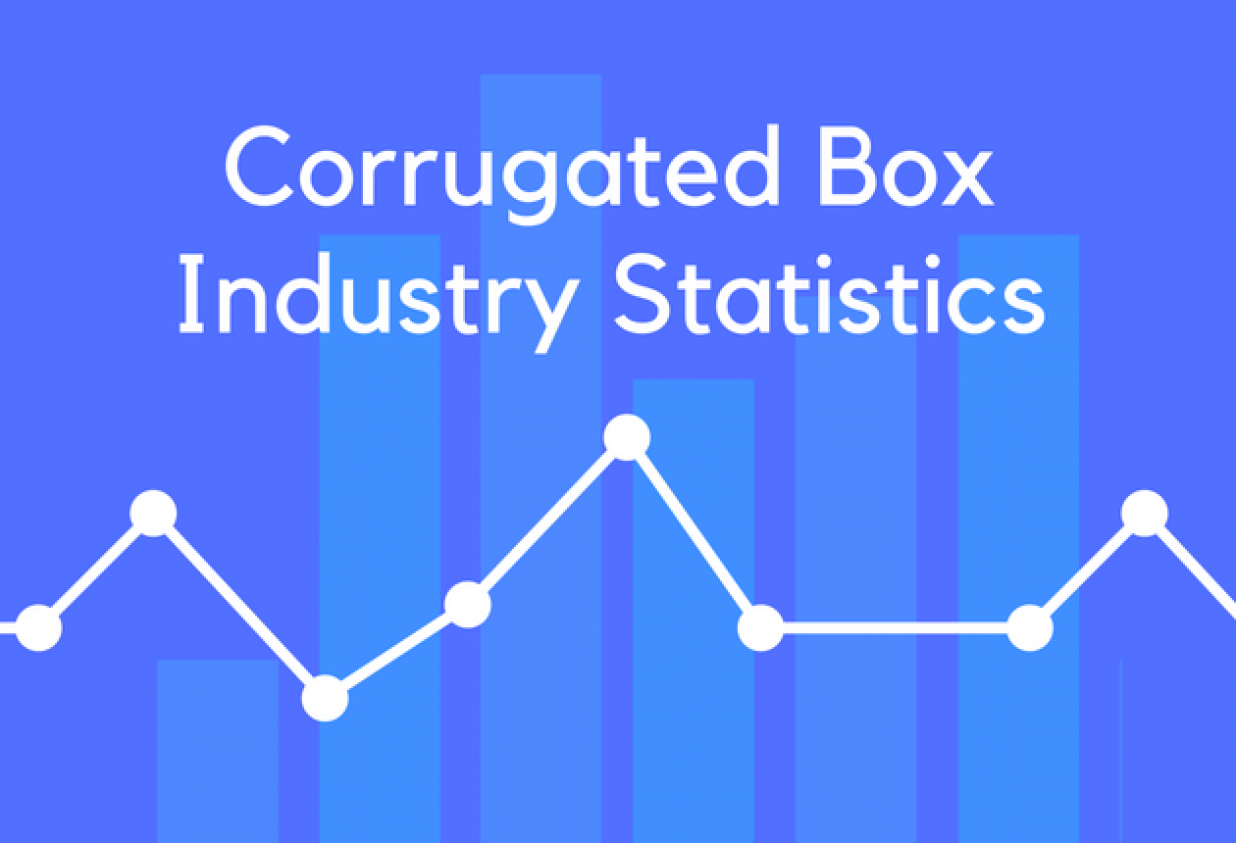 The first corrugated box was produced in the United States in 1895. In the span of just 10 years, almost all of the wooden crates or boxes that were being used for various purposes were replaced with corrugated cartons. By 1908, corrugated cardboard and paper-board were used interchangeably by the industry.

Corrugated boxes provide a number of advantages. You can print on the exterior material. They are durable enough to withstand standard shipping processes. Modern corrugated boards can be provided in several color varieties, graphics options, and box designs.

#1. Container manufacturing and cardboard box manufacturing in the United States is an industry currently valued at $66 billion. (IBIS World) 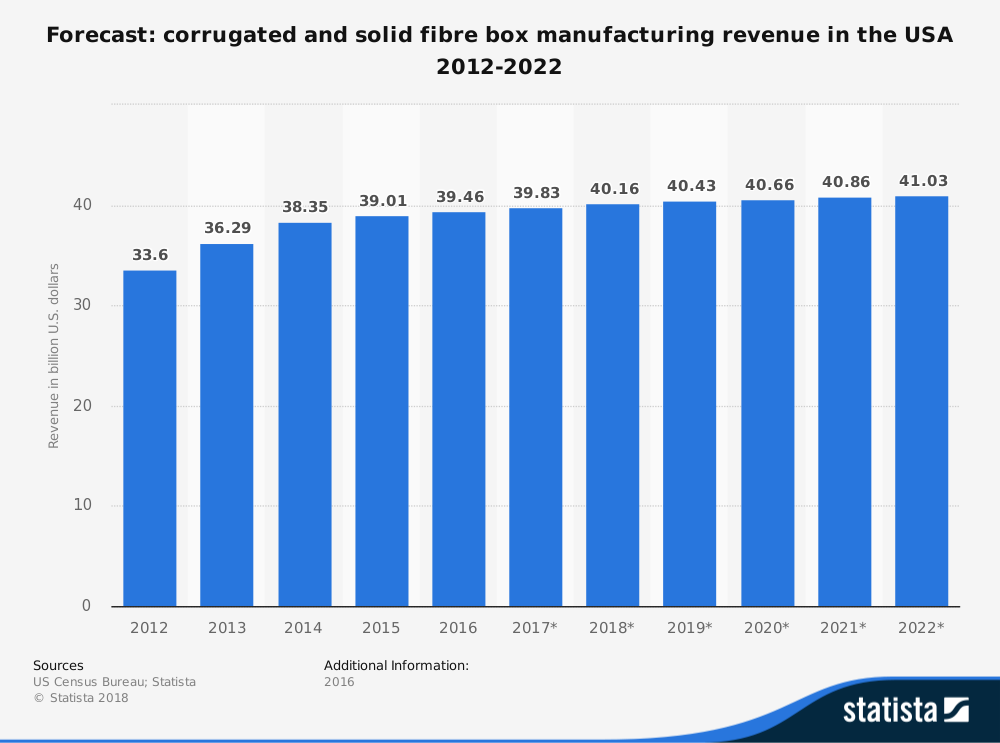 #3. About 2,000 businesses are currently active within the corrugated box industry in the United States. These firms are responsible for the direct employment of more than 141,000 people. (IBIS World)

#4. The four largest manufacturers of corrugated boxes, cardboard, and shipping containers hold a 33.1% share of the industry. West-Rock holds the largest market share, at 12.3%. (IBIS World)

#6. 80% of the shipments generated by the industry originate from corrugator plants. The remainder of shipments for the corrugated industry come from sheet plants. (Advance Packaging Corporation)

#7. The total value of industry-related shipments in 2016 was $30.8 billion. (Advance Packaging Corporation)

#8. 31% of corrugated box manufacturing products are consumed by the food manufacturing industry. In second is wholesale trade, at 16%. These industries are followed by paper manufacturing (9%), agriculture, forestry, and fishing (8%), and beverage manufacturing (6%). (Numera/FBA) 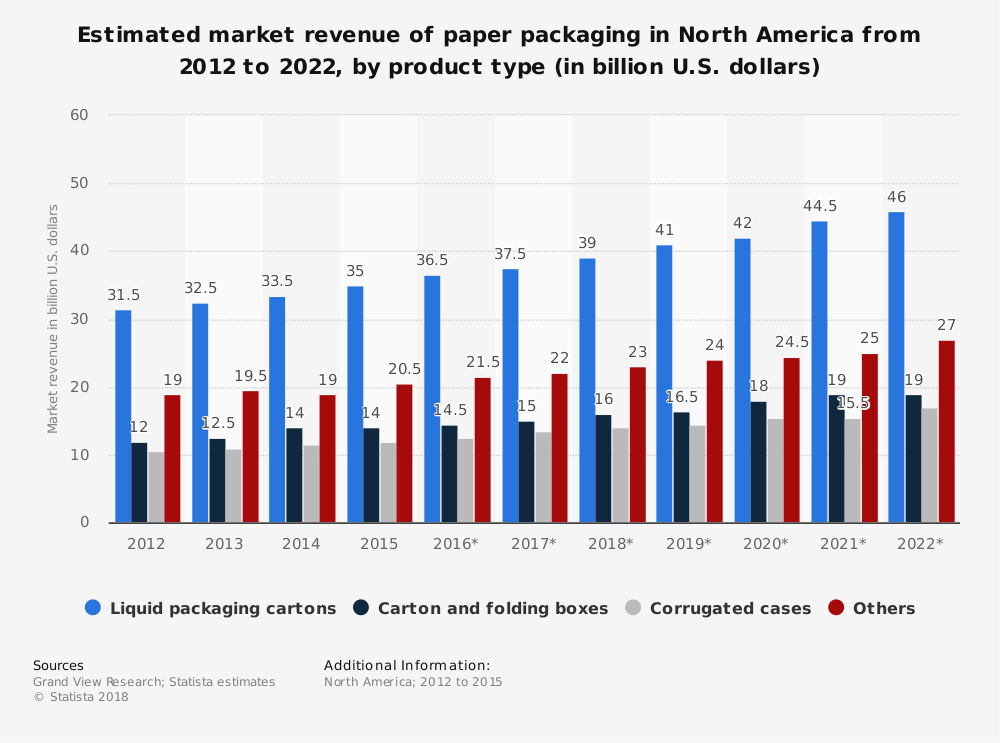 #12. Although the number of corrugator plants has decreased by nearly 200 since 1992, the total production levels have risen by over 500 million square feet in total yearly production at the same time. (Fibre Box Association)

#13. In 2016, paper mills in the United States averaged higher than 95% operating rates, thanks to strong levels of demand and higher pricing structures. (Advance Packaging Corporation)

#19. Just 1.1% of the corrugated boxes which are manufactured each year are used for a purpose other than packaging. (Statista)

#20. 34% of the global packaging industry is dedicated to paper and board products. (Ernst and Young) 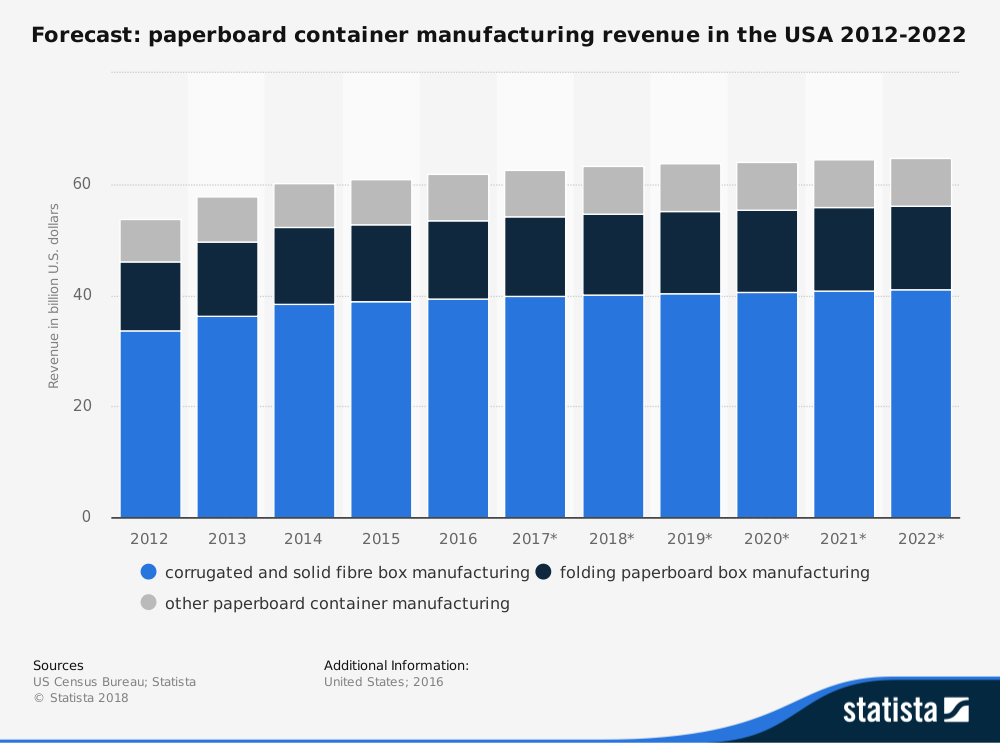 With online sales increasing, production levels rising, and several new plants beginning operations between 2018-2024, the corrugated box industry looks poised for rapid growth. Although only 3 projects are deemed to be “certain” additions to the industry in the United States, the improved capacities and innovative production methods will keep production levels above 1 billion square feet for the foreseeable future.

Nothing on the economic horizon points to a reduction in the need for corrugated boxes. Even in times of recession, this product is used by domestic and international organizations in a variety of ways. Households will still need access to food and beverage products, which make up nearly 40% of total industry revenues.

A strong economy means a strong push for new revenues by the corrugated box industry. A weaker economy means stable revenues. That’s a win/win situation for everyone involved with the industry.